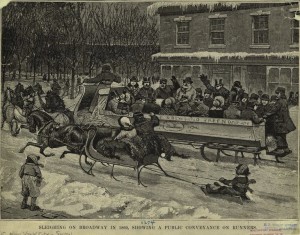 In mid-19th century New York, commuters relied on omnibuses — horse-drawn carriages that seated a dozen passengers, often many more, on wooden benches. (The driver stopped when passengers tugged on a strap attached to his ankle.) After a snow storm, carriages were replaced with sleighs.

In his diary, lawyer George Templeton Strong described commuter sleighs as “insane vehicles” that “carry each its hundred sufferers, of whom about half have to stand in the wet straw with their feet freezing and occasionally stamped on by their fellow travelers, their ears and noses tingling in the bitter wind, their hats always on the point of being blown off.”