In 1832, 190 years ago, Joseph Brewster (a hatter by trade, who also speculated in real estate) built a brick and marble row house on Fourth Street in what was then a quiet, exclusive suburb of New York City. In 1835, three years later, prosperous merchant Seabury Tredwell purchased the house amnd moved in with his wife, Eliza, their eight children, and four Irish servants. They lived in the house for almost 100 years. Today, miraculously, that merchant’s house still stands. It has been open to the public as a museum since 1936. For the complete story, read Museum Historian, Mary L. Knapp’s new book, Miracle on Fourth Street: Saving an Old Merchant’s House.

When Gertrude, the youngest member of the large Tredwell family died in the house in 1933, her niece and heir, Lillie Nichols, prepared to sell the house and its contents at auction. Recognizing the historic value of an historic house that retained its original furniture and décor, a distant cousin of the family, George Chapman, arranged to purchase the house and turn it over to a non-profit organization he established to operate it. For 25 years, Chapman personally provided almost all of the Museum’s support. By 1959, however, when he died, time had caught up with the old house and it was perilously close to being beyond repair. 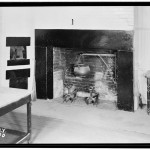 In 1832, this house was built with an open hearth. 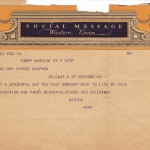 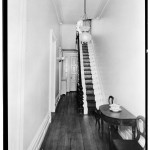 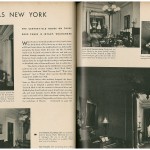 In 1962, after three years with temporary caretakers, The Decorators Club of New York City, the oldest professional women’s organization of interior designers in the country, took on the Museum as a project. They hoped that by raising funds and restoring the furniture and reproducing the draperies and carpet, they could continue to present the house to the public.

In 1965, the Old Merchants House, as it was then called, was designated a New York City Landmark at the first meeting of the newly formed Landmarks Preservation Commission. A year later it was designated a National Historic Landmark. 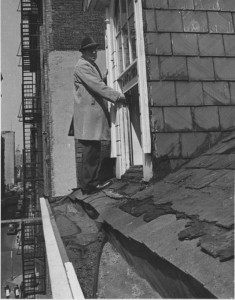 In 1968, serious water damage convinced the Decorators that extensive structural repairs were needed. They called on New York University Architect Joseph Roberto, pictured at left on the roof of the Merchant’s House, to advise them.

It was not long before Joseph Roberto, and his wife, Carol, fell in love with the house and committed himself to a complete structural restoration that was done in four stages and took nine years to complete. Funding came from grants from the federal and state governments, private foundations, and corporate and individual donors.  Phases One and Two included extensive exterior work. Phase Three covered interior structural work, and Phase IV, painting and restoring the interior, including restoration of the beautiful ornamental plaster work in the parlors.

Throughout, Roberto scrupulously maintained the integrity of the original design, reusing original materials wherever possible. Then, members of The Decorators Club and the Robertos restored and reinstalled the collection of the Tredwells’ furniture and personal belongings. Reproductions of the original draperies and carpet, which had been in storage, were installed, and the Museum reopened to the public in November 1979. In 1981, the interior of the Merchant’s House was formally designated as a landmarked site by the City of New York. Today, it is one of only 119 interior landmarks.

Following Roberto’s untimely death in 1988, with the help of a number of the city’s preservation organizations, the Museum raised seed money to hire its first professional staff.

In 1997, the Museum received a $1 million grant from the Vincent Astor Foundation, thus for the first time securing an endowment that would provide for its future financial security. In 1999, the house joined the Historic House Trust of New York City, further ensuring its preservation for generations to come.

Today, the Merchant’s House faces a grave threat: a developer has plans to build an eight-story hotel next door. Click here to learn more.